Large simple moulds are generally made from fabricated metals. For highly detailed parts where a high quality finish is necessary either cast metals or nickel electroformed moulds are used.

The process doesn’t use pressure to form the part so the mould itself needs only to have enough strength to support itself. As the material cools it naturally shrinks away from the surface of the mould; and mould design must take this into account to create an accurately size final part.

Moulds are usually mounted to frames in halves to allow them to be placed on the machine. In some cases multiple moulds will be placed on the same frame known as a spider. This can provide substantial savings in demoulding and charging the moulds reducing cycle times. 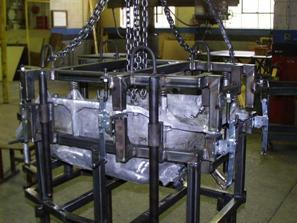 Moulds must be vented to allow heated air to flow freely in and out during the process. If the venting tube is too small or poorly designed its possible for the mould to be subject to pressure and either explode or implode. The vent tube must also be deep enough to project through the powder pool so material does not flow out of the pipe during the rotation. A good guideline is that the vent tube should be 13mm for each 1m3 of mould volume.

Moulds can also be treated on the surface to provide a range of different surfaces on the final products and the outside of the mould can be treated by various methods including adding pins roughening the outside and using black paint to increase cycle times.